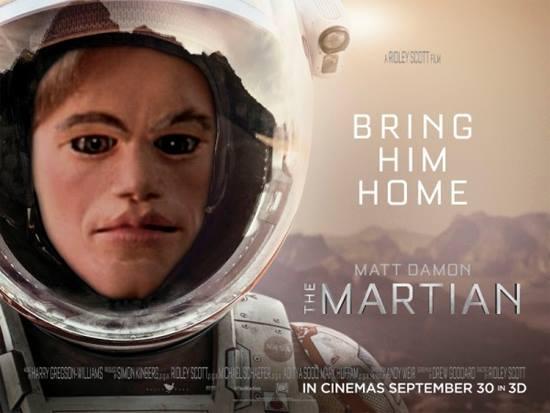 I love conspiracies. The Martian needed more of that. In fact, not many people know this, but: The Martian is based on a book from Andy Weir; which is actually a spinoff from the proposed but never green-lit prequel to Interstellar; a proposed prequel that is loosely based on Matt Damon’s rendition of a real life astronaut named Mark Watney who is stranded on Mars about 150 years into the future (from the point of The Martians release) and actually perishes, despite Hollywood sanguine, because his life wasn’t a movie and the song Life on Mars was actually inspired by the late, great Canadian singer Paul Albert Anka: who hated David Bowie with a burning passion and compelled the latter to release the timeless classic that is supposed to be a direct parody of a recording from Frank Sinatra while at the same time stealing the successful methods of Anka; specifically when the Canadian singer bought the rights to a 1967 French song named Comme d’habitude that Bowie wanted to use on his failed single named Even a Fool Learns to Love. This all leads to the a conniving motivation: The only reason the business of entertainment exists in any kind of visual or audio medium is to exploite talent and creativity for money and fame.

This is the kind of ludicrous shit I’m looking for here. Matt Damon doesn’t want to be saved. He’s wants you to take a ride for $11.50.

Anyway, you may be wondering: What was Ridley Scott thinking? Creating the most thrilling, intelligent, terrifying experience in the film era of 2015? For shame, Scott. I don’t need this now. I need to let people in on the absolute crap released from Hollywood, not exceptional entertainment like this. Where’s Prometheus 2?! Everyone is waiting for answers. We don’t want to join Matt Damon in space, observing (arguably) the most crafty, slick methods of survival EVER. Speaking of the rant above, where were all of the conspiracies?! We needed a crazy character to inform the public of Jeff Daniels’s evil and corruption. How Nasa sent a group of people to Mars to ensure that Matt Damon has a one-way ticket to an isolated, oxygen-free paradise. You can’t sit here and say that sand storm wasn’t orchestrated.

In all seriousness (a first here), The Martian was really, really, really good. Like, likely the best film of 2015 good. But, with all films, phenomenal or abysmal, there’s some work to be done. And, boy, does this need a lot of work. I can’t be the first viewer of this film to ever suggest what coulda been done betta:

David Bowie’s Life on Mars should have absolutely, hands-down, been apart of the 80’s soundtrack:

Aha! It all comes full circle. Life on Mars was clearly about Mars, so what gives? It probably would’ve resonated a lot more with Damon than Turn the Beat Around. It would’ve made him lose his fucking mind. Too on the nose, you may point out. Well, think about this: If you were stuck on Mars, wouldn’t you want the meaning to be pretty meta? On top of all of the other “firsts” that Damon had on the planet, like cultivating crops. The first person to crank Life on Mars ON MARS. Not these other shallow, insufferable 80’s hits. You’re making Bowie crazy. Just look at him.

What’s a legendary artist to do without royalties?

Every single character in Space should have been on the verge of tears, anxiety, self-destruction, etc.

This especially goes for Matt Damon’s character, who is stuck on Mars for 459 sols, which in Earth days, for all of you trivia freaks…look it up on Google. I don’t have time for this. Regardless, Damon sheds a few tears and talks to himself for the average viewer’s two and a half hour sedentary exercise. And for what? To make it safely back to Earth, with no repercussions whatsoever? Not even an injury? Not even a manic state of mind? C’mon, guys. Conspiracies abound when I suspect how exactly Matt Damon was supposed to handle that much isolation on an unknown, volatile terrain in space; on a scary, perpetually perilous planet? Did Nasa prepare him for this? Was this Jeff Daniel’s plan all along? Did they have a one on one meeting where their goal was to create this public stunt that was actually a plan to combine the forces of U.S. and China, in order to obtain some semblance of world piece and propaganda for both democratic and communist governments?! Was this apart of Daniels’ scheme to include China in the Trans-Pacific Partnership?! Scott, my man, these questions remain as open-ended as your Prometheus shit stain in the Alien universe. The audience and production heads may never know.

EPIC FIST BUMP. WE DID IT.

The audience should have been treated to scenes of Matt Damon enduring a forcibly chaste, existential crisis.

Or what I’ll call chaste Damon under situational duress. How can we watch a male character undergo isolation without any signs of sexual turmoil? Look, I know it’s a movie. You only have SO MUCH to cover within two and a half hours but c’mon. You can’t lead me or any of the other hard-earning moviegoers to believe for a second that Damon didn’t try to beat the stick at a single point during this entire calamity. What kind of thoughts were going through his head? As far as I know, he handled the situation pretty damn well for a man who managed to avoid such urges. Give me a break. Can you imagine how it went down when he finally landed on Earth?

Let’s face it, the film is too damn smart for its own good.

How many times will Hollywood tease me with a potentially one-dimensional, overstuffed blockbuster that beats my brain to a pulp with sound, visual, and CGI overload; and instead, blindsides me to make my mental gears turn and reluctantly appreciate every single detail I’m witnessing on screen? I was truly looking for an Avengers 3 in space here. Only Christopher Nolan has the privilege to make these thought-provoking, scientifically accurate films. I don’t pay Ridley Scott to surprise me. I pay him to give me what I expect.